Published by the History Watch Project

“If those in charge of our society - politicians, corporate executives, and owners of press and television - can dominate our ideas, they will be secure in their power. They will not need soldiers patrolling the streets. We will control ourselves.” 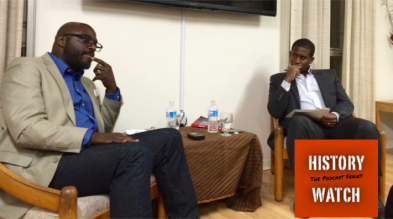 In recognition of Black History month, this episode of the History Watch podcast series showcases David Austin of John Abbott College as he discusses the politics of race in Montréal and the wider North American context.  He is in conversation with Adrian Harewood of the CBC.  Austin discusses a number of themes including state repression and the silences in knowledge production in the academy. This episode is a recording of the Black History Month event co-organized and co-sponsored by the History Watch Project and the Institute of African Studies at Carleton University.

Some key moments in the podcast are listed below:

About David Austin:  David Austin is the author Fear of a Black Nation: Race, Sex, and Security in Sixties Montreal, winner of the 2014 Casa de las Americas Prize for literature in English or Creole. He is also the editor of You Don’t Play with Revolution: The Montreal Lectures of C.L.R. James, and has produced radio documentaries on the life and work of Frantz Fanon and C.L.R. James for CBC’s flagship program, Ideas.  He currently teaches in the Humanities, Philosophy and Religion Department at John Abbott College.

Credits:  Voice credits go to Lina Crompton for the introduction.  This episode was produced by Dr. Audra A. Diptee  of the History Watch Project.

Audra A. Diptee has a PhD in history (University of Toronto, 2006). She is the Managing Director of the not-for-profit The History Watch Project. She is also a university professor. Her research covers common themes in Caribbean and African history.